THE FRIENDS OF JACKSONVILLE'S 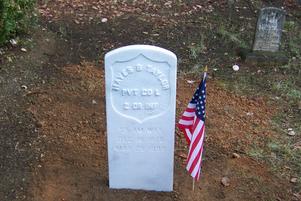 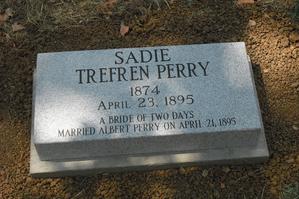 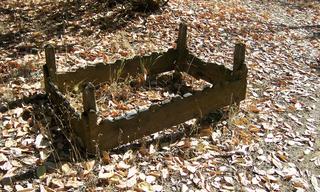 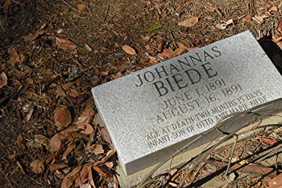 WHO'S BURIED IN JACKSONVILLE

Over the years the Jacksonville Cemetery has grown in size with most section owners adding to their original property at one time or another. Some of Oregon's earliest pioneers can be found resting in this beautiful and tranquil setting in Jacksonville's Pioneer Cemetery.

There are many wonderful and interesting stories of those buried in the cemetery. Pioneers, men, women and children, who made their way west to Oregon leaving behind their homes, most belongings, family and friends. It was a very difficult journey and not an easy life after arriving at their destination. Most found a better life and some even became rich. There were farmers, ranchers, merchants, lawyers, judges, doctors, teachers, newspaper editors, men of the church, and then there were the children. Hundreds of infants and young children buried throughout the cemetery whose life was cut short during birth, accidents, illness and epidemics. There are also over 400 Veterans buried in the cemetery with the oldest dating back to the war of 1812. There are also the grave sites of those who could not afford to purchase a burial plot or because of color or their nationality were not permitted to. They were buried in the County Section, which was actually a part of the City owned portion of the cemetery, and later became known as the Potter or Pauper Field.

Today, no matter who they were or where they are buried, all receive the same respect, care and attention from the Cemetery Sexton, city workers and our cemetery volunteers.

Below are a few of the many stories waiting to be shared by the Jacksonville Pioneers, who take a well deserved rest in Jacksonville's Historic Cemetery.

This little wooden cradle is located in the Catholic Section of the cemetery and only recently did we learn the name of the infant who rests in this grave site. Her name is Bessie Agnus Sprague and she was born on August 12, 1880 and died on August 27, 1880. Her parents were Herbert Gardner and Maud M. Sprague. While the Cemetery Records recorded the death and burial of Bessie, they did not give the location of the grave site. Distant relatives of the Sprague family made us aware of little Bessie's grave site. Plans call for a marker to be placed.

The photo on the right is of the grave site of Johannas Biede who was born on June 1, 1891 in Jacksonville and died on August 16, 1891. He was the infant son of Otto and Marie Biede. Mr. Biede operated a small tin shop and hardware store prior to the family leaving Jacksonville in 1901. The grave site of Johannas in the German Order of Red Men Section of the cemetery was marked by a simple wooden and wire cradle. In 2015 the FOJHC purchased and placed a head stone at the site.

Sadie was born in 1874, and died in the Applegate, 9 miles west of Jacksonville, on April 23, 1895. She and Albert Perry were married in Jacksonville on the afternoon of Sunday, April 21, 1895 and moved to the Neuber-Long Homestead, where Albert was a foreman, on Monday, April 22. On Tuesday morning while removing some ash from the stove her apron caught on fire and Sadie passed away later that day from burns resulting from the terrible accident. The young bridegroom purchased a plot in the Jacksonville Cemetery for his bride and her wedding bouquet was placed on her grave. The grave, which is in the City Section,  was never marked with a head stone. Last year two of our volunteers and Meet the Pioneers Players purchased a head stone to mark Sadie's final resting place.

The photo on the right is of the Military marker for Pvt. Hayes Benjamin Taylor who was killed in action on March 25, 1899, at the Battle of Malabon, in the Philippines during the Spanish American War. Hayes was born in Jacksonville on December 13, 1876 and was the son of Samuel R. and Melissa Taylor. Hayes Benjamin Taylor's remains were returned to his parents and Jacksonville and he was buried in the cemetery on February 21, 1900. In 2012, the FOJHC and working with the Department of Veterans Affairs, were successful in obtaining a Military marker for his gravesite. Hayes, his baby brother Edward, and his parents Samuel and Melissa all rest in the City Section of the cemetery.