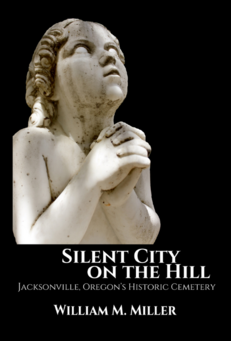 To learn more about the history of Jacksonville's Cemetery and some of those buried within its grounds, may we suggest reading the first book ever written and published on the subject. The Author, William M. Miller, a one-time historian with the Southern Oregon Historical Society, and a current history columnist for the Medford, Oregon Mail Tribune. Bill, along with his wife Debbie, are dedicated volunteers with the Friends of Jacksonville's Historic Cemetery. They generously donated the proceeds from the sale of the book to the FOJHC.

The book is available for purchase at Amazon.com, in paperback or Kindle, or at these other locations: the Jacksonville Visitors Center, Segway of Jacksonville, the Southern Oregon Historical Society Library, or by contacting us at info@friendsjvillecemetery.org.

The Cemetery sits on approximately 30 acres on top of a hill overlooking the downtown business and residential areas, and the Rogue Valley beyond. Recently the City of Jacksonville purchased an additional 11 acres of adjoining land when it became available to allow for future expansion. The original acreage was part of a land grant given to J.N.T. Miller who later sold portions of it to various fraternal and religious organizations to be used as their sections of the cemetery.

The first burial occurred in October 1859, and actually, before the cemetery was officially open for business. John Love, a prominent businessman, was given special permission to bury his mother, Margaret Love. Plots were advertised and offered for sale in December of 1859 and the cemetery was dedicated in 1860, the same year the City of Jacksonville was incorporated. If you walk the grounds you may notice grave markers with dates of death earlier than 1859, however; in most cases these were remains that were removed from other locations and reburied in the cemetery at a later date.

​In 1878 John Hockenjos built a tool house for the Cemetery Sexton to work from and store his tools of the trade. We are pretty confident that there was an even earlier tool house on this same site. This new building

until they could be buried in the ground. The Sexton's Tool House continues to be used today for storing

tools and supplies and as an office area for volunteers.

There are a number of things that make the Jacksonville Cemetery unique among historic cemeteries, one  of which is that it is divided into seven different sections. They include the Jewish (Hebrew), and Catholic sections, the Independent Order of Odd Fellows, Ancient Free and Accepted Masons, Independent and Improved Order of Red Men. The seventh and largest section is the City of Jacksonville's portion which has been added to over the years. Contained within the City section is another unique feature to the  cemetery and that is a Potter's Field. This area is on the north side of the cemetery and contains the remains of blacks, whites, Native American Indians, Hawaiians and possibly Chinese, and others. While none of these graves were marked with individual markers, a large monument honoring the 133 people buried in the "Potter's Field" was erected.

While some simple wooden crosses and headstones can still be found, you will see many elaborate marble

and granite headstones and monuments in family blocks throughout the cemetery. Ornamental iron fencing and gates, stone curbing, engraved entry steps, bollards and urns decorate family blocks. The monuments speak to us about life and death in early Jacksonville. Death by causes once common, but  now nearly unknown, are described: epidemics such as measles, diphtheria, smallpox, lead poisoning, or deaths during the Indian Wars.

Many of the names of the pioneers buried in the cemetery are quite familiar today as names of streets and communities. Others are recognized as names on historic homes for businesses while others leave a legacy

THE FRIENDS OF JACKSONVILLE'S